Speaking for the Deep Sea at the United Nations 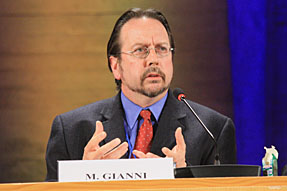 Editor's Note: This post is written by guest blogger Matthew Gianni, co-founder and Policy Advisor of the DSCC.  Matt has over twenty years' experience working in international ocean conservation and has actively participated in fisheries and oceans related negotiations at the UN General Assembly, the UN FAO, Conferences of Parties to the Convention on Biological Diversity and elsewhere.
By Matthew Gianni

Since its beginning in 2004, the DSCC’s objective has been to secure permanent protection for vulnerable deep‐sea ecosystems and species from deep-sea fishing on the high seas. We started off at the United Nations because the UN is the world’s highest political authority when it comes to protecting international waters. Some of us ‘fossils’ working with the DSCC go back a lot further than that, to the early 1990s when the UN General Assembly adopted a moratorium on high seas driftnet fishing and then, as a result of the 1992 UN Earth Summit in Rio de Janeiro, negotiated a new international treaty for high seas fisheries. But that’s a story for another day…

Since 2004, we’ve had quite a bit of success. Our work and the efforts of concerned scientists and a number of governments – amongst the earliest supporters were Costa Rica and Palau - resulted in the General Assembly adopting a series of resolutions calling for urgent action to protect deep-sea ecosystems from destructive fishing practices. We were instrumental in the unanimous adoption of UN General Assembly resolution 61/105 in December 2006 which committed high seas fishing nations to managing deep-sea fisheries responsibly by the end of 2008 or else stop fishing. And in 2009, our work led to the adoption of UN General Assembly resolution 64/72, which reaffirmed and strengthened the 2006 resolution, again calling for countries (so-called “flag States”) to ensure that their vessels do not bottom fish on the high seas if the terms of the resolution had not been met.

And what are the terms of the agreement by which deep-sea fishing can take place as far as the UN is concerned? Well, pretty straightforward

First, if a country wants to deep-sea fish on the high seas (or, more to the point – allow its “flagged” vessels to deep-sea fish on the high seas) it has to first conduct an environmental impact assessment to find out what’s down there in the area it intends to fish and what impact the fishing is likely to have. If the impact would be “adverse” and there is no way to manage the fishing to prevent “significant adverse” impacts - then the country is not supposed to allow the fishing to occur.

Secondly, countries agreed to close areas of the high seas to bottom fishing where vulnerable species and ecosystems are known or likely to occur, unless fishing in the areas can be managed to prevent damage to such species and ecosystems. Note the use of the term “likely”. This is important because the reality is that very little of the deep-sea has actually been studied. So, areas need to be closed to fishing where it is likely that these ecosystems occur.

Of course, we would have preferred an even more precautionary approach but there are ways – using biogeographical information and predictive modeling for example – of getting a pretty good idea where say cold-water coral reefs, sponge beds, tripod fish or xenophyophores are likely or at least might occur.

Finally, high seas fishing countries committed to ensuring that deep-sea fishing would be sustainable; that is, not deplete the species targeted in the fisheries for their commercial value not those that are caught incidentally as bycatch. Unfortunately this is a serious problem in deep-sea fisheries, both on the high seas as well as in national waters. Most deep-sea fish are so-called low productivity species. They grow slowly, don’t reach sexual maturity until their teens or twenties in some cases, and often live to a ripe old age – a roundnose grenadier or an orange roughy can live to 80 and 150 years respectively.

Fisheries for deep-sea species are often referred to as ‘serial depletion’ fisheries because vessels and fleets move from one concentration or aggregation to the next, fishing them out and then moving on to find more. The deep-sea is a big place but life there happens in the slow lane and it is easy, in fact generally a lot easier than in shallower coastal waters, to deplete a species of fish in the deep-sea. Once depleted it may take the species a long time to recover.

Unfortunately, vulnerable deep-sea marine life on the high seas is still largely unprotected. The problem, however, is not the UN resolutions. Rather, it’s the implementation.

We did a review of what countries have and have not done in 2009 and again in 2010. As the DSCC demonstrated, in some cases there have been some real protections agreed to or adoted by regional fisheries treaty organizations. Bottom trawl fishing has been banned around Antarctica but, in many high seas areas the Implementation of the UN General Assembly resolutions has been patchy and poor. For example, no environmental impact assessments have been done for any of the high seas, deep-sea fisheries in the Atlantic and Indian Oceans.

Well, getting regulations in place on the high seas to protect the deep-sea is a work in progress although progress has been slow, excruciatingly slow in some areas… more on this in future blogs. In the meantime, most governments simply don’t know what has been done or not been done – only a relative handful of nations have vessels deep-sea bottom fishing on the high seas according to a recent FAO report – and most of the countries at the UN General Assembly with an interest in this issue look to the DSCC, amongst others, for unbiased information on what has been done.

Which brings us to the UN. The DSCC has already this year advocated for strong deep-sea conservation measures the BBNJ working group meeting, and we will continue our work at the upcoming UNICPOLOS meeting and a very important review running September through December. This review will focus specifically on what states have done to implement the UN resolutions and how the international community might improve implementation.

All in all, it will be a busy year for us at the UN. We very much hope that our early success will continue!

Email ThisBlogThis!Share to TwitterShare to FacebookShare to Pinterest
Labels: Hear from an Expert, Our Goals, United Nations