Where have all the Orange Roughy gone?

Remember that fish called ‘orange roughy’?  While it was fairly common and popular in the 1980s and 1990s, nowadays it’s almost nowhere to be found in the supermarket.  That’s because…well…we’ve very nearly eaten them all.

As the following graphic shows, the orange roughy arrived with a bang and is now leaving with a long, drawn-out aquatic whimper.  The first sizeable catches were recorded in 1979.  A decade later the world catch peaked at a massive 91,000 tons.  And then, just as quickly, catches plummeted and now they linger around 13,000 tons a year. 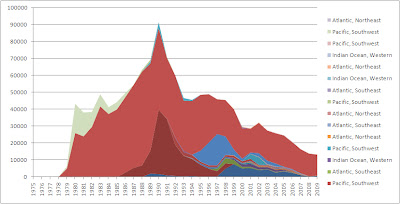 Source: FAO Fish Stat, 1950-2009 Capture Production.
CLICK HERE for an interactive version.
The problem is that the orange roughy is a deep-sea species that cannot sustain the level of exploitation that our technology and policies have made possible.  It simply reproduces too slowly.  Orange roughy typically don’t start breeding until they’re 30 years old and can live up to 150 years. So catching orange roughy is much more like mining than fishing.  In effect, it’s more like a non-renewable resource!
Some countries and regional fisheries management organizations have passed measures to protect the orange roughy.  In Australia, orange roughy was listed as a threatened species in 2006.  Unfortunately, these measures have tended to be implemented once the population has been reduced to low levels and nearing ‘commercially extinction’ – that is, so rare that fishing it is no longer profitable.

What about the remaining orange roughy fisheries?
Nearly 100% of the global roughy catch now comes from the Southwest Pacific, mostly caught by New Zealand.  Though some areas have been closed to orange roughy fishing and catch limits and other measures have been implemented, the 2002 - 2006 average catches on the high seas exceeded the estimates of long-term sustainable yields.  Catches continue to decline, and the future is grim as the fisheries have adopted a pattern of ‘serial depletion’, where fishing operations move from one area to another as local stocks crash. Some fisheries are now as low as 3 percent their unfished size.

And then, of course, is the problem of bottom trawling.
While New Zealand has closed some areas to bottom trawling, other areas are still open to bottom trawling with virtually no controls. That is contrary to United Nations resolutions adopted in 2006 and 2009, which require specific actions to be taken BEFORE proceeding to fish, including:


The New Zealand fishing fleets aren’t required to do any of those things in fully one third of the fishing grounds – the most heavily fished areas.  Unless changes are made and paper commitments become action, it looks like just a matter of time before orange roughy disappear completely from our dinner plates, our supermarkets shelves, and even their own habitat among the ancient corals and sponges of the deep sea floor.