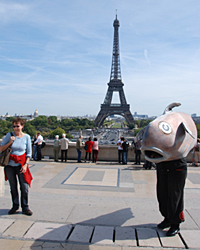 The first stop was the Eiffel Tower. Roundnose was a bit confused why you'd build something so tall. After all, there are plenty of enormous seamounts to admire in the ocean!

Afterwards, Roundnose visited the famous Louvre. Though he likes classic Rome sculpture, he spent a while admiring landscape paintings. Just recently Roundnose has considered taking up painting in water colors.

And finally, Roundnose visited the famous Arc de Triomphe. Completed in 1836, it's just a little bit older than Roundnose's friend Orange Roughy (who's at the ripe old age of 150!)

Learn more about where Roundnose Grenadier has been here.
Posted by DSCC at 14:53

Email ThisBlogThis!Share to TwitterShare to FacebookShare to Pinterest
Labels: Grenadier, Worth Saving Campaign